DIPA hosts a symposium in association with HOMAG 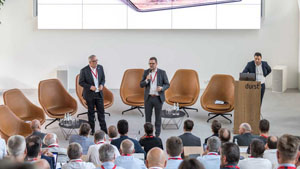 The Digital Printing Association (DIPA) hosted a symposium in Brixen, South Tyrol on industrial digital printing with the motto: “Create your own surface”. More than 50 guests participated to find out more about the many possibilities digital printing has to offer today.

DIPA was launched by the companies HOMAG Group, MB Digitalprint, Li&Co, Durst Phototechnik and Adler-Werk Lackfabrik at the industry’s leading trade fair LIGNA 2019. DIPA sees the individual surface creation as holistic process and intends to provide digital printing technology to as many users as possible. It defines itself as a “joint future workshop” for topics such as consulting, knowledge transfer, standardization and certification.

The symposium in Brixen was the opening event of DIPA. In addition to lectures on market-moving megatrends, the participants were able to learn first-hand from Ediwn Lingg, owner of Li&Co, and Ali Özyilmaz, Managing Director of MB Digitalprint, about the potential and challenges of digital printing and how to integrate it successfully into their own company. Philipp Henry, responsible person for digital printing in the Business Unit Surface Processing at HOMAG: “We are convinced that only together with all the companies and users, involved in the surface process, we can develop the overall market for individual surface creation significantly in order to offer the end consumer added value. The DIPA Symposium impressively confirmed this holistic approach.”

The response of the participants was consistently positive, which is the reason for DIPA host a second symposium for German-speaking countries at the end of 2019. Due to the great interest of the participants in an involvement in DIPA, a concept for the foundation of a registered association is in preparation in order to create a common platform for further activities. The majority of the participants have committed to an holistic and open association. DIPA will thus represent an open platform for all companies that would like to actively participate in the process chain for creating individual surfaces. In particular, training and knowledge transfer will play a central role.